This page provides you with information about my book DX Story, which is available in both English and German.

Since I have also published several articles about the DX generation for the German musician’s magazine Amazona, there are the direct links to these articles published in German language on their site. And you will find information about the DX7 tutorial book DX7 Fibel, which has already been published in the third improved version. In addition, the page lists the best information sites about the DX7 and its siblings, just click and in a new tab opens the relevant website.

So, explore this site and you will certainly find something that will help and entertain you.

The book that tells all about the Yamaha FM synthesizers of the DX generation. Available in English and German language versions. For further content descriptions please scroll down. 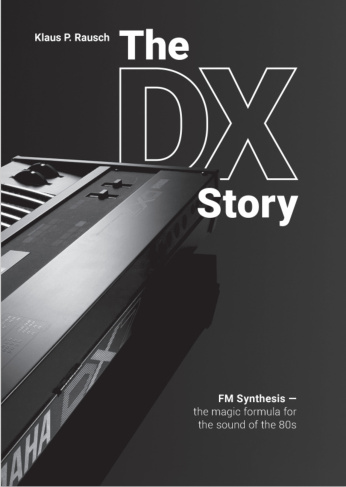 Order informations: Available directly from the publisher epubli here or from any worldwide book distributor and even from your local book store. 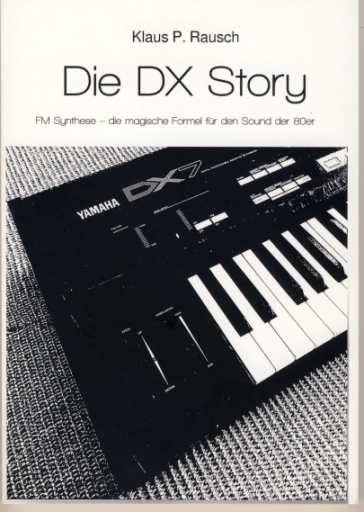 Order informations: Available directly from the publisher epubli here or from any worldwide book distributor and even from your local book store.

Frequency modulation as the magic formula for the sound of the 80s. With just three letters, the Japanese instrument manufacturer Yamaha writes music history at the beginning of the 80s: The DX7 comes onto the market. A keyboard instrument with a completely new sound aesthetic. The magic word is FM synthesis, invented by Dr. John M. Chowning at Stanford University in California.

This book tells the exciting story of the DX7, from the very beginning. How the inventor discovered FM synthesis rather by chance, researched it and was initially rebuffed by the industry. And then finally finds a competent partner in Yamaha. Together they tinker and develop, many prototypes are necessary, until finally the original DX7 is constructed. This changes the modern music landscape practically overnight, because the typical FM sounds are the trademark of many successful productions of the 80s.

I’ve known the DX7 from day one and fearlessly dove into the complex depths of the FM wonderbox back then and figured out how to program it without despairing of the algorithms as a musician. I summarized this knowledge in the well-known DX7 Primer, which has helped many keyboardists achieve the wonderfully bell-like, juicy chart-compatible sounds.

An exclusive book excerpt has been published at Amazona, there you can read something into the topic. In this case it goes directly to the development time of the 70s:

“(…) Scientists made use of Fourier’s expertise as soon as it was about the development of electric and electronic musical instruments. Already in the 20’s of the last century their development began. Not much later, researchers were concerned with additive synthesis. In addition to the pioneers Friedrich Trautwein, Oskar Sala, Hugh Le Caine, Harry F. Olson, Herbert Belar, Robert Moog, Harald Bode, Don Buchla and many other initiators, certainly also privately, scholars at universities tried their hand at synthetic sound generation methods, sometimes with completely different and above all completely individual financial freedom. (…)“.

For over 10 years Amazona has been publishing my German-language reviews, tutorials and articles about vintage keys, including some about that DX Generation.

Yamaha celebrated the 100th anniversary of the company in 1987 and released some special series, the synthesizers were the DX7II Centennial.

The article deals with this instrument and also provides many audio tracks, it starts like this:

“Yamaha is the hot company for synthesizers, after all, they have been fabulously successful for 4 years with the DX7 and its siblings. And now it’s the company’s anniversary: 100 years have passed since the founding of the company, which is something that should be celebrated properly. And so the product management decides on special series of several instruments at once. In the field of synthesizers, the choice naturally fell on the successful model with its so popular FM tone generation. So they grabbed the flagship of the line, which at this point is the DX7IIFD. And spices it up properly. The result is available in a limited edition of 300 pieces. Instead of FD, it now says Centennial on the control panel. Which isn’t the only difference – silver, gold and lots of keys are.”

It was the sound sensation of the 80s: DX7. There were a lot of reasons for that, read here about the first steps of the Yamaha FM synthesizers:

“At the beginning of the 80s, synthesizers are already an established instrument genre. And that, although affordable models were not yet available for too long. Especially the Minimoog is it from 1971, it brought the then completely new sound into all popular styles. The piano and organ manufacturer Yamaha follows this trend in 1974 with the Yamaha SY-1 and not much later already has the first polyphonic synthesizers on the market: CS50, CS60 and CS80. However, these are not quite cheap, cheaper can the manufacturer at best with the SK series, which is launched in 1980. Here organ, string ensemble and synthesizer are combined in a practical way so that especially stage musicians have the most diverse sounds comfortably available with only one instrument.”

The “little” Yamaha FM synthesizers of the DX generation have only 4 operators and were initially in the shadow of their big siblings with 6 OPs. Later, however, they turned out to be a kind of insider tip with their own unique charm:

And it had started with the DX9 model: “It is also a Digital Programmable Algorithm synthesizer and the smaller brother of the later bestseller and it will be in its shadow from the beginning, by the way quite justified. While the really fancy FM sound generation with 6 operators and 32 algorithms shook up the sound world, the Yamaha DX9 (list price 1983: DM 2.950,-) was implanted with a slimmed down 4-OP FM generator with only 8 algorithms. With this trick it is the first representative of a longer list of further 4-OP instruments, which come on the market in the following time. Sonically, this is an enormous limitation, even if the sound is generally similar to its big brother in terms of basic character. In addition, the touch dynamics are unfortunately omitted, which, however, is actually an essential design element in addition to real-time controllers in FM synthesis. But that’s not all, the internal memory for just 20 presets is also quite scarce. And instead of the RAM/ROM cartridge for additional sounds, which was very advanced at the time, Yamaha instead provides a comparatively uncomfortable cassette tape interface. (…)”.

Read more about the DX9 and its later siblings here

The 4 OP FM synthesizers were also offered in a subsequent generation with improved and above all more features:

“(…) When Yamaha reinvented the sound of an entire generation with the Yamaha DX7 in 1983, the call for an affordable version of the Yamaha DX7 soon became loud. Already in the year of the DX7’s release, Yamaha presented the Yamaha DX9 in a similar housing, which worked with only 4 operators instead of 6. The DX9 was in the DX7 housing and thus probably raised expectations too high. The relatively high price and the limited MIDI possibilities prevented a successful marketing. It was not until 1985 that the 4-operator faction of the DX family also achieved a breakthrough with the Yamaha DX100. Especially the desktop expander Yamaha FB-01 enjoyed great popularity and high distribution.(…)”

The well-known German-language DX7 Fibel is nowl in the third improved version. Everything is explained in an easy-to-understand way and the primer starts where the manual leaves off.

Note: The DX7 Fibel is currently under V4 development, so the V3 is not available anymore. Please be patient for the soon to be published V4 version, thank you.

Dave Bristow Interview about the making of the original DX7 Factory Presets, by Immanuel Brockhaus

DX7 Unboxing in 2020 by Synths and Guitars